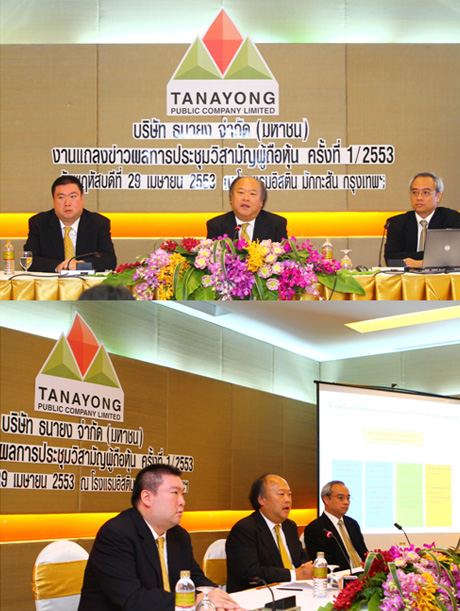 Bangkok, April 29, 2010 – The Extraordinary Shareholders Meeting of Tanayong Public Company Limited (“TYONG” or the “Company”) has today approved the acquisition of Bangkok Mass Transit System Public Company Limited (“BTSC”) and the Company’s name change to “BTS Group Holdings Public Company Limited”. The acquisition and name change are expected to be completed by early May. Furthermore, to reflect the change in revenue structure of the group whereby revenue from skytrain business will become the group’s primary revenue, the Company’s shares will trade under Transportation and Logistics Sector, under Service industry. The Company expects the newly issued shares to begin trading in the Stock Exchange of Thailand by the first half of May, under the new trading ticker “BTS”.

Mr. Keeree Kanjanapas, Chairman of the Board of Directors of the Company, announced that the TYONG’s Shareholders Meeting on 29 April 2010 has approved the BTSC acquisition plan. The Company expects that the conditions precedent will be fulfilled and the acquisition of the BTSC shares will be completed by early May. Furthermore, to reflect the new revenue structure of the group in which the main revenue will be derived from mass transit business, the Company plans to register its shares under Transportation and Logistics Sector, under Service industry. The Company expects the newly issued shares to begin trading in the Stock Exchange of Thailand by the first half of May, under the new trading ticker “BTS”.

On the same day, TYONG’s Board of Directors has also approved the issuance of shares via a Rights Offering (“RO”) of Baht 12,000 million which will take place after the acquisition of BTSC. The RO shares will be offered at the ratio of 4 new shares for every 7 existing shares at the offering price of Baht 0.63 per share and the subscription period from 27 May 2010 to 7 June 2010. In case there are unsubscribed rights, the Company will offer the remaining shares through a Private Placement (“PP”). If the RO and PP (if any) are fully subscribed, the Company will receive total proceeds of approximately Baht 12,000 million which will be used to partially repay the Company’s loan. Furthermore, to provide an incentive for the RO and/or PP subscription, the Company will issue warrants at a ratio of 1 warrant for every 4 new shares subscribed in the RO and/or PP. These warrants are offered at no charge and have a maturity of 3 years, exercisable from the second anniversary of issuance at Baht 0.70. Mr. Keeree and Mr. Kavin Kanjanapas have also stated their intention to subscribe for their allocated portion in the RO to maintain their shareholding in the Company.

Mr. Keeree further added, “After the acquisition of the BTSC shares, the Company’s scope of business will broaden and its asset size will increase significantly. The Company and its shareholders will reap benefits from the consistently strong performance and high growth potential of BTSC’s skytrain business. Furthermore, the potential increase in market capitalization and liquidity will enhance attractiveness of its shares to domestic and foreign institutional investors as well as retail investors. In addition, this transaction will enhance the Company’s competitiveness in real estate business by leveraging TYONG’s experience in developing and managing real estate projects of BTSC.”

After the acquisition of BTSC shares, the Company’s shareholding structure will change. While Mr. Keeree and Mr. Kavin Kanjanapas, in aggregate, will remain as the major shareholding group with 41.46% of total paid up shares of TYONG. There will also be two new groups of major shareholders, namely funds managed by Ashmore Investment Management Limited and funds managed by Farallon Capital Management, L.L.C., both of which are existing shareholders of BTSC. At a later stage, the Company also plans to acquire the remaining 5.4% of BTSC shares at a price of not less than Baht 0.60 by issuing new shares of the Company.